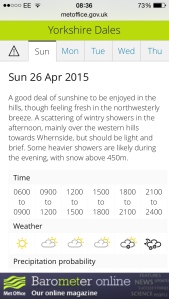 Well, there’s just the one – Whernside (736m) – the westernmost, northernmost and highest of the three peaks. For some, it’s also the dullest. Like its two shorter mates, it has limestone pavement spreading from its feet and a gritstone cap. With no cliffs and a rather anti-climatic summit, it does lack the thrills to be found on Ingleborough or Pen-y-ghent. There’s still plenty to enjoy – not least the Victorian architecture and the views – so don’t be shy.

It’s a bright, sunny day but the wind has some teeth – a perfect opportunity to test my new windproof smock. This will be my first big(ish) day alone in the hills since my accident. From Grunty, I head up toward the Station Inn and follow the track round the back to Ribblehead Viaduct. Its twenty four arches stride out across Batty Moss on foundations over 7m deep. It’s a splendid beast and well worth a look.

I cross under the Settle-Carlisle railway, following the farm track to Gunnerfleet Farm. A group of pied wagtails flits ahead of me in long bounds – it’s odd because it’s too soon in the year for a family and they’re not flocking birds (I’m open to suggestion, if you’ve got any ideas). I turn northwest once I cross Winterscales Beck and then loop round to follow the flank of the hill to the southeast. After the little collection of buildings at Broadscar I turn west for a smattering of limestone pavement. My head is tugged skywards by the odd, looping lament of the curlew – the first I’ve seen this year. I normally pause at this spot for a bite and a drink, but there is an elderly Yorkshire couple having a row about her cousin who’ll tell him to mind his own business. I’m inclined to agree with her cousin. I can hear every word from 20m away so I keep going and lean into the ascent.

It’s a steep route that has recently been resurfaced with (if they’ve done the same as they did on Pen-y-ghent) recycled mill floors. Very sturdy work, I’m sure, but my right knee is less appreciative of the new steps. Of course, my knee might have grumbled a good deal more without the steps. Still, you don’t rebuild muscle by not making it work so I get behind the mule and plough.  A skylark rises singing to hang at the zenith of its arc before parachuting down, like a musical shuttlecock.

Cresting the ridge, I look up to see an inverted black T on a white flash as a wheatear barrels over the drystone wall there – another first for the year. The path turns north northwest here, leading over a series of three rises to reach the summit. I cross the wall to sit on the western side to avoid the crowd. As it means sitting in the wind, I pull on my belay jacket to prevent my muscles stiffening in the chill. The cold air is very clear; I can see the Howgill Fells and, off to the northwest, the strange, molar shapes of the Langdale Pikes.

I unstrap my trekking pole from my pack and limp off along the ridge. My limp is more pronounced as the descent begins in earnest; the summit is only half way and such. There’s more mill floor flagging as I drop down past Greensett Moss. Too early and too cold for any botanical interest at this altitude (at least to my untutored eye) – there are rushes and sedges and heather and none of it in bloom. The path angles northeast, then east then southeast before joining the Craven Way and dropping down toward the railway once more. Shimmers of blue-black flicker out over the tracks – swallows hunting the insects in the heat and shelter of the railway cutting (yet another year first).

The path crosses the rails on the Force Gill Aqueduct – I cannot but smile when I see the gill slithering through its sinuous, cobbled curves. Say what you like about the Victorians (seriously, go for it) but they knew how to make functional structures beautiful. From here I’m mostly on the flat back to Ribblehead, which is as well because my knee is aching like the end of time. 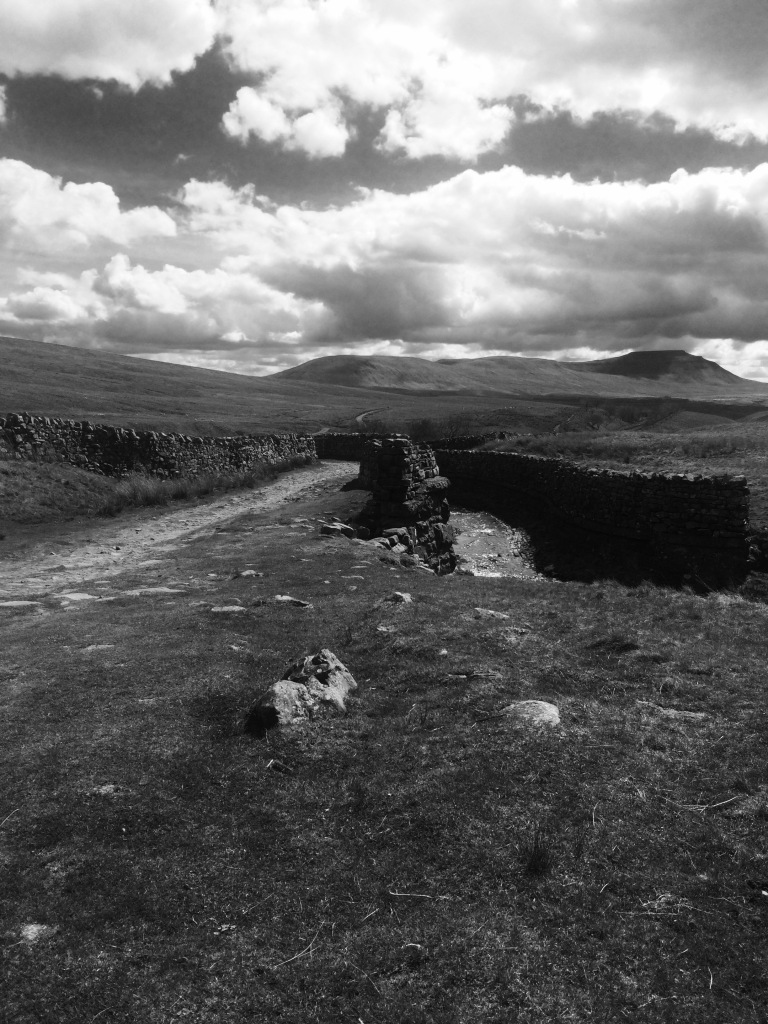 I plod onwards on protesting legs – well, the right is protesting, the left’s just sulking because it’s doing more of the heavy lifting. I’m cheered up by three more firsts for the year. A pair of male meadow pipits scuffle in a brief, territorial flurry before separating to go on their respective ways. Just before the land falls away from me at the viaduct I hear a familiar cry. A pair of lapwings scull over my head with their odd, off-kilter flight. Fun fact – lapwing comes from Old English ‘hleapewince‘ meaning ‘leap with a waiver in it’, which I think is rather beautiful. Finally, my attention is caught by the silvery, rippling melody of a willow warbler in a hawthorn next to the railway track.

After the warbler, the Station Inn appears once more and I return to Grunty after over four hours. In days of yore, I would have clocked this walk in under three hours. Still, given the ludicrous amount of damage I did myself, this is progress and I’m pleased with myself and it’s been a cracking day.